The  federal government sued a suburban Chicago school district  Monday for  denying a Muslim middle school teacher unpaid leave to make a  pilgrimage  to Mecca that is a central part of her religion.

In a civil rights case, the department said  the school district in  Berkeley, Ill., denied the request of Safoorah  Khan on grounds that her  requested leave was unrelated to her  professional duties and was not  set forth in the contract between the  school district and the teachers  union. In doing so the school district  violated the Civil Rights Act of  1964 by failing to reasonably  accommodate her religious practices, the  government said.

Khan wanted to perform the Hajj, the  pilgrimage to Mecca in Saudi  Arabia which every adult Muslim is supposed  to make at least once in a  lifetime if they are physically and  financially able to. Millions go  each year.

Khan started as a middle school teacher for Berkeley School District 87 — about 15 miles west of Chicago — in   2007. In 2008, she asked for almost three weeks of unpaid leave to   perform the Hajj. After the district twice denied her request, Khan   wrote the board that “based on her religious beliefs, she could not   justify delaying performing hajj,” and resigned shortly thereafter,   according to the lawsuit filed in federal court in Chicago.
Read more. 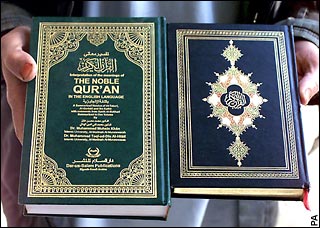 NewsReal Blog will be featuring excerpts from the Center For Security Policy‘s new report Shariah: The Threat to America which can be purchased here or downloaded in full here.

Excerpt 1: The report’s introduction can be read here.

•    The United States is under attack by foes who are openly animated by what is known in Islam as shariah (Islamic law). According to shariah, every faithful Muslim is obligated to wage jihad (whether violent or not) against those who do not adhere to this comprehensive, totalitarian, political-military code. The en- emy’s explicit goal is to establish a global Islamic state, known as the caliphate, governed by shariah.

•    Shariah is based on the Quran (held by all Muslims to be the “uncreated” word of Allah as  dictated to Mohammed), hadiths (sayings of Mohammed) and agreed interpretations. It commands Muslims to carry out jihad (holy war) in- definitely until all of the Dar al-Harb (i.e., the House of War, where shariah is not enforced) is brought under the domination of Dar al-Islam (the House of Is- lam – or literally the House of Submission, where shariah is enforced). END_OF_DOCUMENT_TOKEN_TO_BE_REPLACED 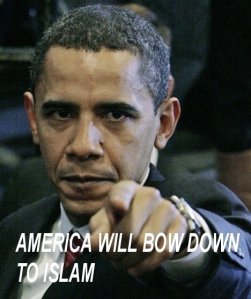 Here’s a measure of just how subservient our present leadership is to American Muslims: Attorney General Eric Holder is reassuring Muslim groups that the Justice Department will continue persecuting prosecuting their enemies after they “raised concerns” the feds were   unfairly targeting the Religion of Peace. The trouble, it seems, is that   the Justice Department keeps arresting Muslims trying to blow their   adopted country to Mahdi-come. According to TheBlaze.com:

Attorney   General Eric Holder reiterated his resolve to prosecute hate  crimes while standing behind the methods used in anti-terrorism cases  during a     speech Friday night before a Muslim advocacy group near San     Francisco.

Speaking to Muslim Advocates, a San Francisco-based   group, Holder    told the group that he’s heard from many Muslim and  Arab  Americans who    feel uneasy and singled out by law enforcement.

The   organization is one of several groups voicing concerns over   hate    crimes, alleged rights violations at the hands of law enforcement   and    the tactics used in anti-terrorism cases.

(You can read more of Holder’s groveling here.) A patriotic Attorney General may have asked his hosts why it is the DoJ arrests Muslims, and only Muslims, ready to perpetrate religious violence against the United   States. He would have had the guts to challenge Muslims to assimilate   into the mainstream of the United States or enjoy their privilege of   living under their theocratic code of Shari’a law — in some country that follows it.

If Muslims in America paid greater allegiance to the United States than they do to the worldwide Islamic ummah, they would….