As you would expect in Chicago politics, all potential Team Rahm transition co-chairs were subjected to stringent background checks… except for the ones who weren’t:

(CNN) – A co-chair of Chicago mayor-elect Rahm Emanuel’s transition team resigned from her new post Friday after it was revealed that she left her high-level state job last summer over ethics violations, CNN confirmed Saturday.

Judy Erwin previously served as the executive director of the Illinois Board of Higher Education and served on then-candidate Barack Obama’s Education Policy Committee during his 2008 presidential campaign. On Thursday, she was named to Emanuel’s transition team and according to a news release, Erwin was also recently hired as managing director for ASGK Public Strategies, the communication management firm founded by former Obama senior adviser David Axelrod.
[…]
But a recent decision by the state Executive Ethics Commission says Erwin used her state e-mail account and phone to campaign for Obama, engaging in campaign fundraising activity and using staff resources to help plan her trip to the 2008 Democratic National Convention.

A full 24 hours from appointment to resignation for ethics reasons. Is that a new Chicago record? Highly unlikely.

Given the man under whom Emanuel studied the art of smooth transition at the executive level, I’d expect more problems in the very near future.

White House chief of staff Rahm Emanuel has indirectly re-entered the picture at the Blagojevich corruption trial. Government witness John Harris, Blagojevich’s onetime chief of staff, said he received a call from an intermediary for Emanuel on Nov. 10, 2008, six days after the presidential election.

The intermediary was John Wyma, a lobbyist pal of Blagojevich and Emanuel. And the message Harris said Wyma was asked to deliver was that President-elect Barack Obama “would be thankful and appreciative” if Blagojevich would appoint Obama’s friend Valerie Jarrett as Illinois’ new U.S. Senator.

On a wiretapped phone call with Blagojevich the next day, Harris related details of his talk with Wyma. Blagojevich was at home and said he had babysitting duties. Cartoons on TV could be heard in the background.

“They’re not willing to give me anything but appreciation, (expletive) them,” Blagojevich said of Wyma’s message.

Blagojevich also wondered out loud whether he could use the Senate appointment to induce Obama to lean on Obama’s friend, billionaire Warren Buffett, to bankroll an issue-advocacy group to be run by Blagojevich that would give the governor a way to make some money and remain on the public stage.

Then he floated more ideas. Maybe he would appoint deputy governor Louanner Peters to the Senate seat and have her keep it warm for him in case he was facing impeachment. In that event, she would resign and he would appoint himself to fill the new vacancy.

And then there was the U.S. Rep. Jesse Jackson Jr. feint. Blagojevich said he would plant a false story with Chicago Sun-Times gossip columnist Michael Sneed that “Jesse Jackson Jr.’s star is rising,” meaning that the governor was considering putting him into the Senate post vacated by Obama.

Harris made it clear that Blagojevich had no intention of actually appointing Jackson but just wanted to use the prospect to scare Obama’s people into cutting a deal on the Senate seat.

In an earlier wiretap played in court, Blagojevich was heard referring to Jackson as “a bad guy” and noting that Obama didn’t want to see him as senator either.

A top aide to former Gov. Rod Blagojevich said he believed Barack Obama knew of Blagojevich’s plot to win himself a presidential Cabinet post in exchange for appointing Valerie Jarrett to the U.S. Senate.

Rod Blagojevich and his wife, Patti, are on the phone discussing a job possibility at a labor organization.

Rod Blagojevich to his wife on Barack Obama’s marriage

R.B.: He’s more henpecked than me. So he listens to Michelle Obama more than I listen to you.

Rod Blagojevich on a job with the Salvation Army

R.B.: Oh, that would be huge. But do you have to wear a uniform? Forget that.

Rod Blagojevich on a job at the United Way

Rod Blagojevich on his potty mouth

Harris said Blagojevich came away believing Obama knew what he wanted after having a conversation with a local union representative, who in turn spoke with labor leader Tom Balanoff, with whom Blagojevich met to discuss a Jarrett appointment. Jarrett, now a White House adviser, was seeking the appointment to Obama’s Senate seat.

The defense on Wednesday moved to force the prosecution to turn over FBI reports of Obama’s interview with federal agents in December of 2008. Obama is not accused of wrongdoing.

“Testimony elicited by the government from John Harris and wiretaps played in court raise the issue of President Obama’s direct knowledge and communication with emissaries and others regarding the appointment to his Senate seat,” lawyers wrote in the filing.

The filing came on the trial’s third day of the extensive playback of recordings in which Blagojevich is heard repeatedly discussing ways to personally capitalize on his Senate seat appointment power. Blagojevich could be heard plotting to try to head up a charity; swearing and snapping at his wife, Patti, and dismissing the possibility of a federal position that pays $190,000 a year.

Obama’s 2008 internal report about his staff’s contacts with Blagojevich at the time indicates that Balanoff relayed to Jarrett that Blagojevich was interested in a Health and Human Services Cabinet post.

Recordings also revealed that Blagojevich had tried to get the Chicago Tribune’s editorial board fired after it ran a series of disparaging write-ups about the then-governor.

Also Wednesday, U.S. District Judge James Zagel refused to gag the talkative Blagojevich as prosecutors had asked. Zagel said Blagojevich keeps saying he’s innocent, and that anyone who says otherwise is a liar.

I do not like these dirty crooks, or how they lie and cook the books.

I do not like your smug replies, when I complain about your lies. 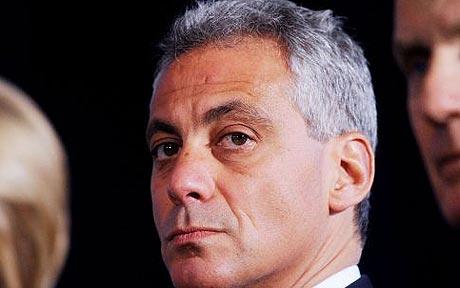 Rahm Emanuel, the White House chief of staff, is expected to leave his job later this year after growing tired of the “idealism” of Barack Obama’s inner circle.

Washington insiders say he will quit within six to eight months in frustration at their unwillingness to “bang heads together” to get policy pushed through.

Mr Emanuel, 50, enjoys a good working relationship with Mr Obama but they are understood to have reached an understanding that differences over style mean he will serve only half the full four-year term.

Friends say he is also worried about burnout and losing touch with his young family due to the pressure of one of most high profile jobs in US politics.

“I would bet he will go after the midterms,” said a leading Democratic consultant in Washington. “Nobody thinks it’s working but they can’t get rid of him – that would look awful. He needs the right sort of job to go to but the consensus is he’ll go.”

An official from the Bill Clinton era said that “no one will be surprised” if Mr Emanuel left after the midterm elections in November, when the Democratic party will battle to save its majorities in the house of representatives and the senate.

It is well known in Washington that arguments have developed between pragmatic Mr Emanuel, a veteran in Congress where he was known for driving through compromises, and the idealistic inner circle who followed Mr Obama to the White House.

His abrasive style has rubbed some people the wrong way, while there has been frustration among Mr Obama’s closest advisers that he failed to deliver a smooth ride for the president’s legislative programme that his background promised.

“It might not be his fault, but the perception is there,” said the consultant, who asked not to be named. “Every vote has been tough, from health care to energy to financial reform.

“Democrats have not stood behind the president in the way Republicans did for George W Bush, and that was meant to be Rahm’s job.”

There were sharp differences over health care reform, with Mr Emanuel arguing that public hostility about cost should have forced them into producing a scaled down package. Mr Obama and advisers including David Axelrod, the chief strategist, and Valerie Jarrett, a businesswoman and mentor from Chicago, decided to push through with grander legislation anyway.

Mr Emanuel has reportedly told friends that his role as White House chief of staff was “only an eighteen month job” because of its intensity.

Regarded as the most demanding after president, it involves controlling the president’s agenda, enforcing White House message discipline as well as liaising with Congress.

His departure would regarded as another sign of how Mr Obama’s presidency has been far more troubled than expected.

Mr Emanuel has privately expressed a readiness to run for mayor of Chicago, which is also his home town though he was never part of the Obama set and did not endorse the then senator in the Democratic primary in 2008.

That would however depend on Mayor Richard Daley stepping down when he is up for re-election in 2011.

The chief obstacle to taking the White House job originally was doubts about moving his three children from Chicago. According to another former Clinton official, he has let friends know that he is “very sensitive to the idea that he is not a good father for having done this”.

One of Washington’s more colourful characters, Mr Emanuel is the son of Jewish immigrants and was an accomplished ballet dancer at school. He served as a civilian volunteer with the Israeli Defence Force in the 1991 Gulf War.

The White House did not respond to a request for comment.

June 20, 2010 — budsimmons
Emanuel links fall elections to GOP support of BP
Jun 20 09:18 AM US/Eastern
WASHINGTON (AP) – President Barack Obama’s chief of staff is warning about what might happen if Republicans—who have defended BP over the Gulf oil spill—were to run Congress after the fall election.Rahm Emanuel says the GOP philosophy is to paint BP as the victim. He says Obama will make clear to voters the fundamental differences in how each party would govern.

Emanuel tells ABC’s “This Week” it would be “dangerous” if the GOP held power in Washington.

He says GOP lawmakers and candidates are attacking the administration for demanding that BP set up a $20 billion compensation fund.

Last week, Rep. Joe Barton apologized to BP for what he called a White House “shakedown.” The Texas Republican later stepped back from those remarks.