Cartoon of the Day: Who Owns Obama?

Cartoon of the Day: Who Owns Obama? 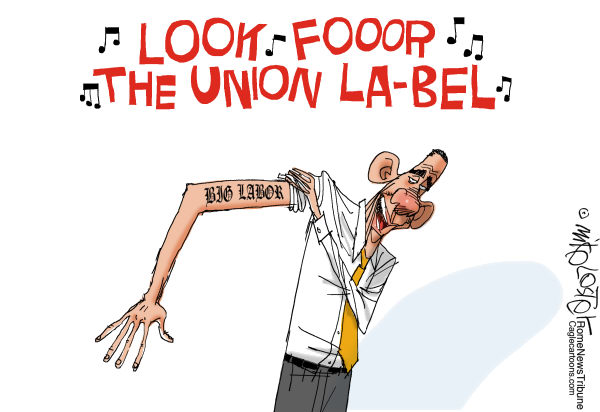 The ‘Good Work’ of Planned Parenthood

The ‘Good Work’ of Planned Parenthood

Fresh off professing
his faith at the National Prayer Breakfast, Barack Obama is taking a stand for
the “good work” Planned Parenthood does.  Despite undercover exposés
of Planned Parenthood workers supporting everything from prostitution to
underage sex trafficking, the President of the United States believes the clinic
on the corner deserves American taxpayer support.

Much to Obama’s dismay,
the US House of Representatives recently voted to “completely de-fund Planned
Parenthood,” which receives about 1/3 of its $1
billion dollar annual budget from
government grants.

With the money of hard-working Americans, including
those morally opposed to abortion, at 820 locations across America Planned
Parenthood pays the salaries of clinic workers who are so committed to providing
confidential health
services that they’re willing to overlook pimps exploiting underage
girls in the sex trade.  Then, if a pubescent girl should happen to
conceive, Planned Parenthood is also willing to maintain secrecy and, if need
be, administer an abortion on a 13 year-old child.

In fairness, the “Good Workers” at Planned
Parenthood, ever concerned for the well being of all their clientele, do
speak on behalf of teenage sex workers by cautioning undercover pimps that to
avoid infection after an abortion,
little girls should spend time healing before returning to work.

Apparently Republicans with a conscience felt it was time to stop acting
irresponsibly and discontinue being a party, through
funding, to an organization unconcerned about illegal sex trafficking,
statutory rape, prostitution, and abortion.  Barack Obama
disagrees.

“Pro-life politicians have often gone after the abortion
provider, while pro-choice politicians like President Obama have rushed to [the]
defense” of an organization that claims to keep children safe despite failing to
report tragic incidents like the rape of an 11-year-old
girl.

In a recent NBC12 interview, committed
Christian/Planned Parenthood supporter Barack Obama was asked whether the most
recent video by the conservative activist group LiveAction,
exposing a “clinical supervisor” counseling a pimp on how to provide
reproductive health services to 7th graders, “warranted a review of
Planned Parenthood’s funding?”

In the interview, when confronted with the
damning evidence against Planned Parenthood, the President deflected the impact
of the video sting.  In an effort to “move the country forward,” an “unyielding” Obama,
America’s most ardent abortion advocate, defended the organization by saying “I
think sometimes these issues get manufactured.”

Is Barack Obama willing
to risk children’s lives based on what he “thinks?”  Doesn’t “sometimes” mean
only sometimes accusations are manufactured?  What about the times they
are not?

During the interview, master of redirection, Barack skillfully
turned the focus to what he considers the real threat to America:  the
blogosphere.  Obama’s
response to “allegedly damning“
videotape proof of a Planned Parenthood supervisor vowing to cover up a crime
was: “They get a lot of attention in the blogosphere.”

Is the threat of
the malicious blogosphere that vital a concern?  Because evidently, children
infected with STDs, being sold into sex slavery, being raped and impregnated and
put under the knife in an abortion mill is not that big of a deal to Barack.

Focused like a laser and determined to not get “distracted with these
issues” Barack Obama is encouraging America to concentrate on more pressing
topics like saving jobs, including those of Planned Parenthood workers who may,
on occasion, employ a rogue worker who offers helpful advice to sex
traffickers.

Obama’s defense of Planned Parenthood reveals a mindset that
the President of the United States believes the organization should continue to
be funded even though, on more than one occasion, clinicians have been caught
doing the “good
work” of assisting pimps in the exploitation of underage girls.